The First Galactic Civil War was a time of almost unprecedented violence and destruction after centuries of relative peace, and the technology of the era was quickly found wanting, insufficient to meet the needs of the increasingly demanding war effort. This resulted in a dire need for the Galactic Republic to engage in research and development in order to find more effective ways to wage war against its adversary, the Confederacy of Independent Systems. Sometimes these lines of inquiry led to a re-examination of past technologies, abandoned in favour of more convenient or effective technologies. Exoskeletons were not new to the galaxy; a primitive form of them had been used thousands of years prior, during the Jedi Civil War. Studying this old technology, Galactic Republic scientists developed a new exoskeleton variant that would essentially bridge the gap between infantry and armoured vehicles, granting a single soldier the benefits of both. Limited by time and the technology of the era, however, they were unable to achieve their initial goal, and instead settled for what became the clone blaze trooper armour.

The exoskeleton serves as an advanced set of power armour, encasing its user within a protective cocoon. There is enough space within to fit all but the largest of sentient beings, allowing most to wear conventional armour inside the exoskeleton. Opened through a series of electronic locks, the exoskeleton is entered from the front and, upon activation, automatically sealed to render itself airtight. Once activated, the trooper was armoured far beyond any other soldier on the field. Clone blaze troopers would skim along the ground using back-mounted jetpacks, firing their twin blasters and using their powerful limbs to deal with close-range foes, to create beachheads in enemy lines for their comrades' use.

The challenges in making such a hulking suit of armour functional were considerable. Weighing more than most light vehicles, the initial design was too heavy for a clone to use. This led to the incorporation of servo-motors and a back-mounted jetpack, allowing the exoskeleton to move at a walk or skim along the surface of the ground at considerable speed, enough to outrun all but the fastest of sentients. Due in no small part to the limits of exoskeleton technology, however, this armour has its weaknesses. While highly resistant to small arms fire, the exoskeleton demonstrated that it was ineffective against heavy vehicles and weapons, forcing it quite strictly into the anti-infantry role, where it still faced issues against larger groups. Furthermore, the suit heavily limits the pilot's vision, with the lack of sensors further exacerbating the problem. The armour's unique piloting mechanism was unfamiliar to most, with only specially trained clones able to use it effectively. In attempts to challenge these weaknesses and acclimating the exoskeleton to the realities of today's battlefield, contemporary suits had their internal controls modified, in the hopes of making them easier to control for those without extensive training in the armour's use.

With the end of the war, the clone blaze trooper armour was almost entirely phased out of use, but it was used as inspiration for what eventually became the Zero-G spacetrooper armour. While much of the armour was destroyed or lost during this process, a number of pieces found their way into the black market or the hands of collectors, ensuring that isolated suits can be still be found today. 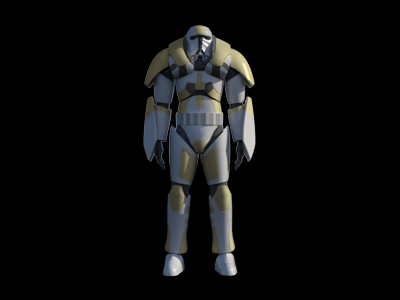