The CAP-2, also known as the Captivator, is a two legged walker designed to overcome and capture fleeing enemy personnel. Because of these attributes it is sporadically employed by various bounty hunters.

The design of the CAP-2 is somewhat similar to that of the Imperial AT-ST, having two legs and a front, center-mounted blaster; but that is where the similarities end. The cylindrical-shaped body, which also acts as the cockpit with the pilot standing within, is covered by a strong bubble-shaped transparisteel visor. Two large mechanical arms sticking off the front of the body enable the Captivator to grab and hold onto its victim and, once captured, they are placed into a restraint mounted on the back of the CAP-2.

Many feel that the CAP-2 is too slow, ungainly and loud to be very effective. For this reason ambush is a common tactic used. The vehicle is equipped with a good array of sensors and allows the pilot to quickly and safely detail a map of the surrounding territory and then position it to be the most effective in capturing any withdrawing enemy troops.

Today they serve successfully in many local law enforcement agencies and private security firms. A small squad of CAP's combined with foot soldiers has quelled many civil riots and slave uprisings across the galaxy. 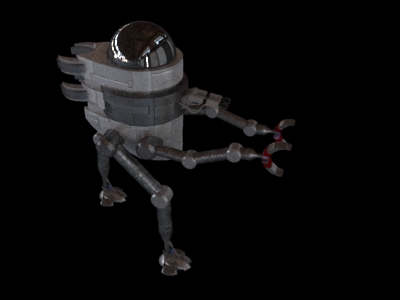