zZip Product Concepts Limited originally developed the vehicle known to the galaxy today as the Gladiator Walker as code designation AT-RSv. The company itself took a huge venture into the design and when costs for the vehicle's development skyrocketed, it was brought forward into final testing before all of the development flaws were worked out. During a rather spectacular failure that ended up in the deaths of several engineers and pilots, all government and special interest funding was pulled, leaving the company out of options and closing down the AT-RSv project.

One venture capitalist who thought there was potential in using the vehicle in entertainment holo dramas revitalized the project and brought much needed credits to the the suffering developers by purchasing the rights to the vehicle production under a front company known as SecuriTech Corporation. Capitalizing on this venture, which portrayed gladiatorial combat, Jorbo the Hutt put together several arena circuits that mimicked those of the holodramas. It was not long before the AT-RSv designation was subsumed by the name Gladiator Walker by both its enthusiasts and that of the company itself.

Unfortunately with all good things, there is a downside. Technically speaking, the Gladiator Walker worked on a type six fission nuclear reactor that was known to leak under extreme measures, causing critical explosions that killed any in the nearby radius. To prevent these critical melt downs, a security protocol was put in place to shut down the vehicle in the event it took too much damage. This was marketed for pilot safety reasons, although the real reasons remained profit based. While nuclear meltdowns were highlighted in the arena, the byproducts caused havoc on systems maintenance and led many mechanics to abandon the otherwise efficient vehicle in favor of newer designs. 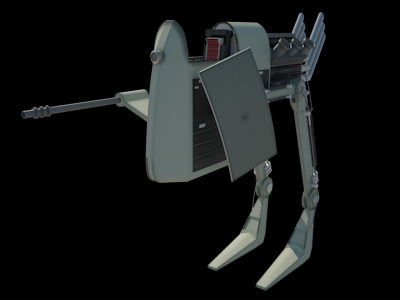