Origins of the CVI Rotating Heavy Cannon are largely unknown, having been present before the fall of the Old Republic and the loss of many historical records. Maintaining a heavy following within the farming community, the CVI has served to provide an inexpensive, easy to use, "crowd control" alternative when dealing with inevitable swarms of hostile fauna.

Typically mounted on vehicles to suppress and harass infantry, the heavy weapon has many other uses, such as deterring wampas, gundarks, and other dangerous creatures. While possessing the ability to be set up on the ground, versatility in the spread of fire is restricted while planted on its axes.

These heavy cannons have an interesting design feature not present on most rotary cannons. The rotating barrels are compact, and are situated behind the main barrel, reducing the chance of an object getting stuck inside the rotating parts and stalling the weapon. This design makes the CVI a versatile and reliable tool, whether used for military or civilian purposes. 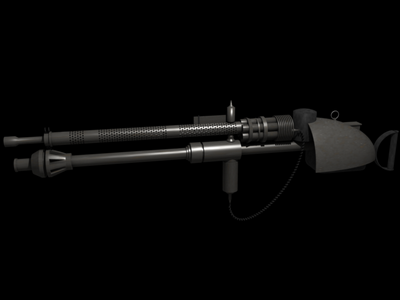