Developed by a weapons firm during the First Galactic Civil War, the K-43 is an anti-vehicle cannon that is based upon an early model of the Beam-tube laser rifle. As testing of the prototypes progressed, a tresle duopod, long range scope, and stabilizing brace were added.

The K-43 is not for sentients with poor skill or strength. The weapon utilizes a complicated reloading mechanism which results in a long downtime between shots. This delay is compensated for by the powerful blast of the cannon, which can wound or even cripple military vehicles. Sentients with miserable accuracy will suffer even more, as each shot is bound to reveal the shooter to its target.

Used mainly for combat against enemy vehicles, the cannon has seen new implementations from more creative, and perhaps, desperate clients. Police and criminal organizations alike have tried using this weapon against ships that were trying to hastily depart a spaceport with some degree of success. As witnessed by some hunting holovids, big game hunters have tried using them with larger game such as Rancors and Fambaa. However, the expense of the ammo and downtime between shots causes those individuals to quickly lose interest in pursuing this option for hunting.

Steadfast, unswerving, and susceptible to modification, the K-43 has found primary interest among a mid-class black market clientele along with some terrorist groups that operate on cell-based patterns, as the shooter is usually backed up by a spotter equipped with some sort of mechanical-enhanced long range vision. 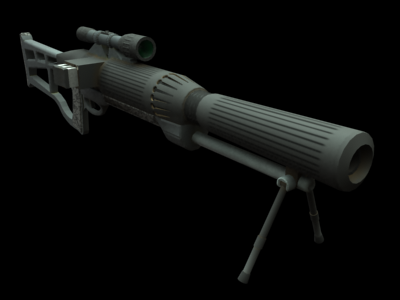