The G-40 was developed by Merr-Sonn Technologies at a time when the popularity of repeating blasters was on the rise. Militaries around the galaxy were looking for a rugged repeater that could be set up in nearly any environment, was easy to transport, and was safe to handle. Merr-Sonn took it as a challenge and developed arguably the most rugged of repeating cannons of its time, but at the expense of its appearance. Within two years of beginning development, Merr-Sonn Technologies unveiled the G-40 as their premier repeating blaster.

When the G-40 was introduced, it was noted for having a very simple set up as it required only two people. It required one individual to carry the barrel assembly of the repeater, while a second individual carried the tri-fold and large power cells. When the repeater is deployed, the power cell is inserted by pulling the two firing grips together and pulling backwards to expose the chamber, loading in the power cell, and closing it by pushing forward again with both grips. There is also a port for plugging the blaster into a portable power grid, such as a power fission generator, negating the need to power the weapon with a power cell. However, extensive use has shown that fire discipline must be exercised when using direct power, as lengthy bursts can overheat the weapon. When compared to other military repeating blasters, the G-40 has a higher energy consumption rate-per-shot, although this is balanced by a higher lethality-per-shot due to the increased energy expenditure.

The repeating blaster has been praised for its durability and low maintenance requirements, along with the minimal effect that rain, water, and sand have on its ability to operation in combat conditions. On top of this, the repeater requires only periodic cleaning after use, and a monthly maintenance when deployed in a combat zone. The G-40 has also almost no moving parts aside from the loading mechanism and the adjustable blaster guard. Users have complained about difficulties repairing the barrel assembly of the blaster when it is damaged, as it is a single piece. This complicates repair in the field unless the users have a spare barrel assembly. The utility of the weapon is demonstrated in the ability to be set up nearly anywhere without difficultly, including spikes underneath the feet that can be dug into terrain to keep it from moving from its position. A drawback attributed to the G-40 is the lack of stability in snow and mud environments, as the spikes in the tri-fold frequently do not obtain a good grip and, more often than not, slide when firing.

The G-40 at the time of production was considered the ugliest repeating blaster on the market, which earned it the nickname "Green Gar Gary". A stark green color and the unwieldy blaster guard, at the time were considered the most off-putting aspects of the repeating blaster. This led to many owners to repaint it in their own unique paint schemes and remove the blast guard to increase the G-40's range of motion. Others, however, have kept the blaster guard attached as it been proven to save the lives of its operators during combat situations.

With the G-40 being inexpensive to produce, it has seen mass production throughout the galaxy and been utilized by mercenaries, pirates, and governments alike, for use in rough combat environments. While generally seen more often in forests, deserts, and other notably rough environments, it can also be found in back-world, urban cities and fortified bunkers held. While the G-40 has great success, it is generally overshadowed by its nicer cousin, the Merr-Sonn Mark II, seen in larger cities and governments. 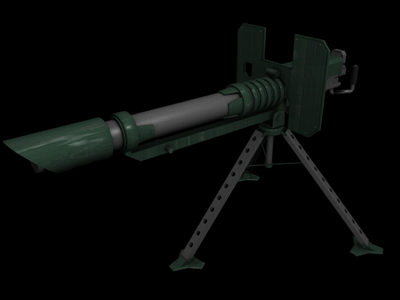