A common misconception, the Spice Eels of Sevaracos II actually bear no relation to the Spice Grubs of Kessel, nor do they produce Spice or any of it’s bi-products. Instead, the name Spice Eel was an earned honorific for the incredible, insatiable hunger for the substance that drives the Spice Eels existence. Subterranean, the spice eel is a feared adversary for even the most experienced mining crew. Once contained to the underground tunnels of Sevaracos II, the Spice Eel is now found anywhere mining operations dig too deep and too greedily, often imported as eggs on improperly decontaminated mining equipment.

The Spice Eel is native to the planet Sevaracos II, a planet infamous for the vast naturally occurring spice deposits found throughout the planet. The Spice Eel possesses an incredible bite provided by a triangular mandible and a corrosive, acidic spray capable of dissolving rock and even durasteel. Using these adaptations, the spice eel burrows through mountain ranges at an incredible speed. Dense, durable scales cover the spice eels body and obscure 2 rows of crustacean like legs below the creature giving it incredible speed and dexterity despite its worm like body.

Spice Eels are naturally blind but possess a powerful sensory organ capable of emitting and hearing ultrasonic frequencies and vibrations. Spice eels are able to identify spice deposits in rocks from several kilometers away by ‘hearing’ the density of the strata ahead of them. Similarly, Spice Eels are drawn by explosive and sonic mining equipment, often burrowing below excavators and equipment, devouring the operator when the cave floor collapses below it. Spice Eels have also taken to using these mining caves as nests, providing a safe place for the females of the species to lay eggs. Young Spice Eels are born rather small in size, 1 to 2 meters in length, but their growth is rapid during the first 10 to 12 years of their lives. Growth slows as they age and they mature into reproductive age after about 8 years.

Spice Eels found on Sevaracos II grow unnaturally large, often in sizes exceeding 15 meters in length. Some of the largest specimens recorded exceeded 30 meters and were approximately 150 years old. The unnatural size and ferocious behaviour of the Sevaracos Spice Eels has been attributed to the quantity of the spice found in the Sevaracos’ Eels diet. Spice Eels found on other mining planets tend to be a little smaller and a bit more placid, often being more territorial but less aggressive than their home world brethren. 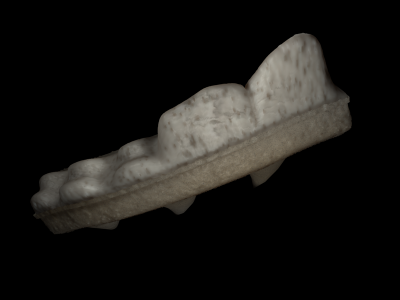