The techno-service droid was created by the now-defunct Vertseth Automata in an attempt to branch into the protocol market with a smaller droid, programmed to have twenty languages ready for use. However, during development it was hit with multiple redesigns for the droid's intended purpose, ending up as a compact service and maintenance droid. When finally unveiled, the market was slightly confused which, in turn, resulted in dismal sales.

The small size of the techno-service droid makes it portable and easy to store. Most of the droid's mass is split between its elongated head and its distended lower torso; the elongated head contains additional room for the droid's processors and cognitive modules, necessary for the droid to be adept in computer operations and engineering. The larger droid brain, in addition, gave the techno-service droid a higher degree of intelligence than most other labor droids, allowing for witty and loyal personalities. Most notably, the droid's core programming is equipped with a speech recognition pattern which can then search the local holonet for a translation package and install it in under half a minute. The droid is also equipped with special repulsorlifts underneath the feet which allow the droid to float over uneven terrain, or push the bottom of its round feet together to create a small wheel, allowing it to travel quickly to its destination.

Due to the complications and complexity of the techno-service droid, sales never materialized and Vertseth Automata went defunct within a few years, their product being bought up by liquidators. Many have been seen in museums or in private collections, along with a book being written on possibly one of the strangest droids ever created. Others have found a use as they are extremely loyal to their owners. Many found a niche with working with bounty hunters and mercenaries, often copying their masters behavior. This has led to the short droid being underestimated, as some crime reports show, the techno-service droids shooting their supposed owners dead before escaping, most likely to their real masters. 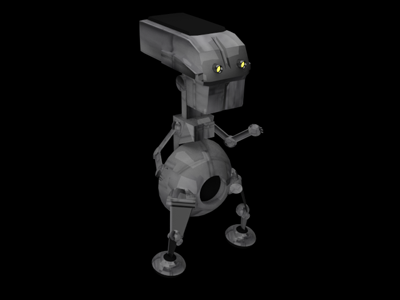