The reek is a large, herbivorous, ungulate native to the grassy plains regions of the largely tropical world of Ylesia. With its two curved horns extending forward from behind the jaw, an additional third horn curving back from the forward portion of its skull, and weighing an average of more than a ton, reeks are impressive and formidable creatures. Their thick, toughened skin, often sporting a rough, pebbly texture, offers these creatures a great deal of natural defense, allowing them to move easily through the thick Ylesian jungles between grazing lands, either for protection during the heat of the day or in search of greener pastures. The coloration of their skin is highly dependent on their diets, with the normal brown taking on various highlighting tones depending on the vegetation they consume, particularly with reeks living and adapting to other worlds across the galaxy.

Reeks tend to congregate in moderate sized herds, allowing their calves to be raised more successfully within the protection of the group. Given the placement of the reek's eyes in relation to its lower horns, limiting its vision when it lowers its head to graze, this herd behavior enables the group to keep a better watch over its surroundings. Unsurprisingly, given their appearance, reeks are usually very territorial, defending the areas in which they graze both from rival herds and encroachment by potential predators alike. Males, too, will frequently compete for the females of the herd, initially brandishing their large horns in threat displays and finally locking horns with rivals in fierce competitions, as their flattened snouts allow them to bring all three horns to bear in a charge.

Despite their territorial aggression, reeks have proven popular enough that a large number have been exported from Ylesia to many other worlds over the millennia. Several notable subspecies have emerged as they adapted to their new surroundings, notably the Ithorian, Kashyyyk, and Iridonian reek. When domesticated, reeks make very capable beasts of burden, and the Zabrak of Iridonia adapted the species into a traditional military mount for combat. Other groups have been known to use reeks in gladiatorial exhibitions, altering their diets with the inclusion of meat in such a way that the animals become even more aggressive. Such an animal is usually easy to identify, as its skin will take on reddish tones as their meat intake increases. While popular sport on some worlds, animal rights activists across the galaxy deplore the treatment of these reeks, often seeking what actions they can against the hunters. 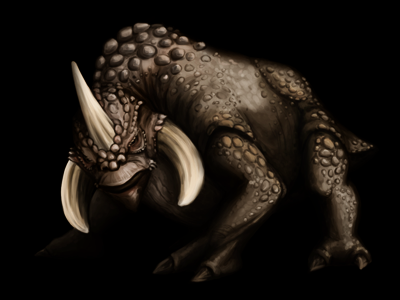 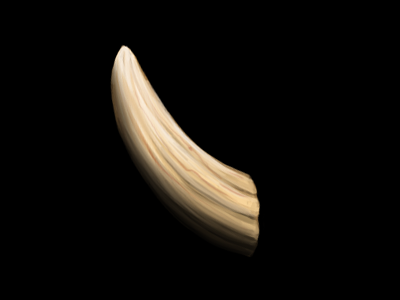