The DD-13 Medical Assistant droid was originally manufactured by Ubrikkian Industries to be used aboard their medlifter transports. These vehicles proved less successful than first hoped, but this rugged droid found favour among the handlers of Republic contracts, who purchased it in large numbers to aid clone troops on the front lines of battle. Due to its origin and the number of amputations and surgeries these droids had to perform, they were nicknamed "Galactic Chopper Droids" by clone commanders. Nevertheless, despite misgivings about a medical droid made by a company known for heavy machinery, it saw extensive use and continued to remain in service until its contract was cancelled after the fall of the Republic.

The droid has a versatile design and is used to carry out or assist in a variety of medical procedures. The two upper arms of the DD-13 are modular and can be equipped with a number of tools or equipment to perform emergency surgeries with precision, especially those related to the installation and fine-tuning of cybernetic implants and prostheses. Additionally, the droid has internal storage capable of containing the medical supplies required for an emergency. The adjustable tripodal base allows the droid to move through rough terrain and its relatively hard casing provides it with substantial protection. The droid also has a cylindrical head containing a vocabulator, which the droid rarely uses, and a processor designed specifically for compiling and maintaining an extensive database of medical procedures. There are also a series of medical sensors calibrated to monitor a patient's vital signs.

After the cancellation of its contract with the Republic, Ubrikkian Industries sold the design for the DD-13 on the general market. Despite no longer catering exclusively to the galactic government, the droid still sees extensive use by various companies and governments. Even now its popularity shows no sign of abating and it can be found across the galaxy. 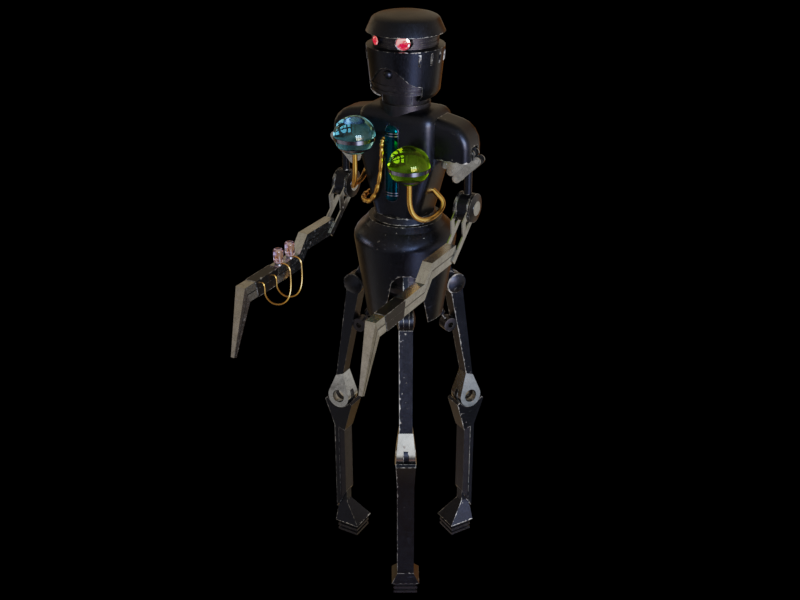