Being one of the oldest models of medical droids available, the Republic Medical Droid has commonly been considered obsolete due to the release of more advanced droids such as the 2-1B. Originally created to serve as assistants for organic doctors, the Republic Medical droid was only programmed to perform basic medical procedures. As a result, it lacked even the most basic bedside manner protocols. However, before other medical droids were developed, the Republic Medical droid was a crucial resource for hospitals. It kept medical areas sanitized, re-stocked medical supplies, took notes for doctors and performed basic maintenance on medical machines. The droid also kept watch over long-term patients and immediately alerted doctors whenever their status changed. It was also used to conduct basic intake procedures for new patients, which freed organic doctors to deal with more critical patients and issues. The success and popularity of the Republic Medical droid led to future designs such as the MD Medical Specialist being released.

The Republic Medical Droid’s head is squat, similar to the battle droid designs it was originally based on. It also retains the thicker armor of a battle droid across its upper body, making it much stronger and sturdier. This allows it to provide general restraint against hysterical or unruly patients, preventing them from harming themselves or others without becoming badly damaged in the process. Its vocal processor is incredibly basic, making what few words it can say sound harsh and mechanical. Its arms are thick and reinforced to allow it to carry heavy loads, and its hands can be equipped to carry various medical supplies for doctors to use. Its fingers are very mobile, making it capable of bandaging wounds against infection and treating minor injuries such as scratches, bruises, and splinters. 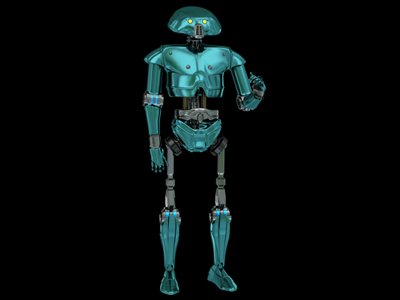