Designed several years before the Clone Wars, the Battle Droid makes up the main infantry force of the Trade Federation. The droid's head was designed to imitate the shape of a Neimoidian's skull to strike fear in their enemies, while their bodies were modeled after the Geonosians. While earlier models were colour coded to show their role or rank, later models were coloured to blend in with their surroundings with only a numerical marking on the back of a comlink booster pack serving to distinguish one droid from another.

Battle Droids were designed for cheap, mass production and are relatively weak compared to other military droids. Their main armament includes an E-5 Droid Blaster and a few thermal grenades. Initial programming of the droids limited them to relatively simple tactics during combat such as swarming their enemies. However, during the Clone Wars, the tactical programming was improved and made more efficient overall, though the droids' reaction times during battle remain quite slow.

At first Battle Droids were managed by a central control mainframe, typically located in a starship or a well defended facility. This created a vulnerability, however, that led to severe failures after a mainframe was destroyed, so newer designs gave the droids autonomy in the case of such a catastrophic event. Battle Droids have also been coded to take a role as pilots in battle, which allows them to take control of tanks and barges if their pilot leaves the vehicle. However, they cannot operate any of the vessel's weaponry, making them relatively useless in combat operations. 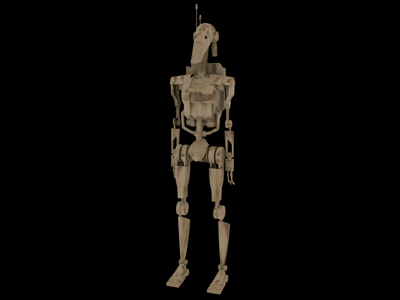