The R0-L0 tank droid, cleverly nicknamed the "Rolo", is a heavily armored battle droid that was designed primarily to withstand an enormous amount of punishment and continue functioning. Public rumor has suggested that the tank droid was designed and manufactured by the GenSci Institute to serve as security for research both in their facilities and in the field.

The R0-L0 boasts a duranium armor casing that is thicker than the B-2 Super Battle Droid and a stronger deflector shield generator than the Droideka, both of which it was designed to replicate and replace. Unfortunately, the tradeoff for its increased durability was the inability to attach heavy or even medium blasters, leaving its offensive capabilities feeling a little light. While the tank droid's body and propulsion are heavily armored and difficult to damage, its dual light blasters are mounted on humanoid limbs which are weakly attached to the torso. Should incoming blaster fire break through the R0-L0's shields, the mechanical limbs holding the tank droid's weaponry are easily severed - all but rendering the droid useless for its intended role. The tank droid's complement of light blasters and thick armor make it an ideal choice for anti-infantry engagements, though a well-placed grenade or rocket would certainly prove to be an issue. Armored targets such as vehicles are all but immune to the R0-L0 as it lacks the firepower necessary to punch through their thick hulls.

Despite packing lighter weaponry than its competitors, the R0-L0 was designed with a triangular continuous track propulsion system that allows for increased mobility over rough terrain compared to the standard humanoid limb design. This track design was inspired by popular vehicle models like the Sandcrawler and Compact Assault Vehicle and has proven itself to be sturdier than standard droid propulsion systems since it cannot be as easily dismembered or critically damaged.

Although the R0-L0 tank droid has numerous advantages and disadvantages, there are many throughout the galaxy that want to get their hands on the engineering specifications or a working model to dismantle. Unfortunately, the designs of the R0-L0 are proprietary to the GenSci Institute and they have maintained a strict control over their unique creation. The R0-L0 tank droid is sturdier than its competitors and can survive in combat longer due to its ability to withstand punishment, increasing its utility during any battle. 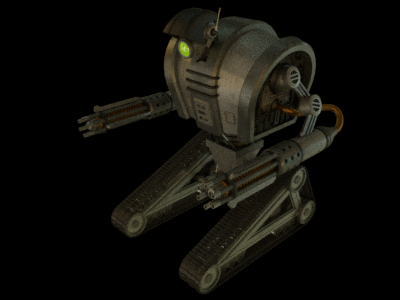