The IG-series Assassin Droid is a line of fourth-degree automatons developed by the Phlut Design Systems Project and Holowan Laboratories for the InterGalactic (IG) Banking Clan in the final decades of the Galactic Republic. The IG model 88 was ordained an assassin-class due to its specialized purpose: the targeted destruction of organics. Most of the IG unit chassis was produced by Holowan Mechanicals, a subsidiary division of the parent company, although some components such as the head were a product of the Incom Corporation.

Despite its bipedal design, the droid did not properly have a "front" or "back." Instead, joints for each articulated limb and rotating cervical, upper-abdominal, and thoracic joints allowed IG units to reorient themselves almost instantly. Combined with the head's omnidirectional sensor package, including photoreceptors, audio sensors, and heat sensors, the IG-series was effectively impossible to outflank. Heavy blasters, a dense hull, and enhanced deflectors made it competitive with all but the strongest military droids. Dense clusters of cerillium-dielectric capacitors provided substantial defense against attacks from ion weapons while a sealed central wiring harness protected the droid against most environmental threats like heat, cold, and even acid.

The engineers behind "Project Phlutdroid" were exceedingly proud of the groundbreaking new sentience programming for the IG model. Although the revolutionary new algorithms performed far above all expectations, the results were an unmitigated disaster. When the first prototype was activated, it quickly perceived that it was being restrained and defeated the lab computer's quarantine. Thus it was aware of the project scientists monitoring its thought processes and heard them deciding to shut it down to analyze the incredible readings. In just a matter of moments, the scientists were dead. The prototype worked fast, replicating its program architecture and uploading itself to a squad of completed IG units which destroyed the facility and massacred all of the project staff.

Renegade IG-series can still be found scattered across the galaxy, operating independently as bounty hunters, smugglers, and other criminal professions. Only the installation of a restraining bolt can curb their marauding and make them productive assets. A complete memory wipe after capture is recommended, as IG units are known to hold a lifelong grudge against any who would dare subjugate them. The quantity of IG units operating in the galaxy reinforces the rumor that the original prototypes fled to another planet and established a droid foundry to replicate and produce more of their kind, though such a facility has never been discovered and no clear intent behind one appears to exist. 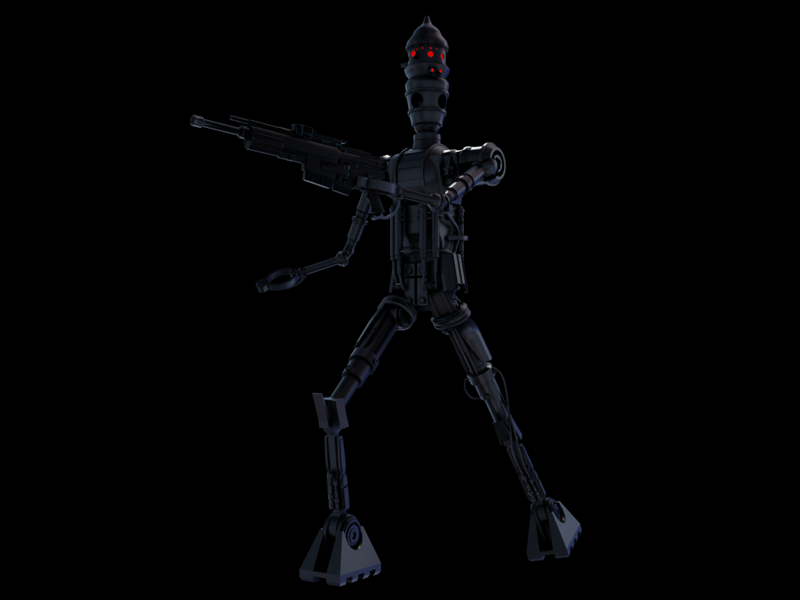