The sword is a bladed weapon that has been around for many ages. Archaeologists have found many different variations of this simple, yet effective weapon on numerous worlds. What is perhaps the most interesting thing about the sword, is that many of these discoveries come from periods in civilizations prior to hyperdrive travel. Because of this it is impossible to say that any one person or civilization invented the sword, leading some to regard it as a 'sentient invention'; an evolutionary discovery made by many races as they gain sentience.

There are two main variations of the weapon: a single-handed version and a dual-handed version. Each has its different fighting style but all incorporate the principles of balance, measured strength and opportunism.

There are many ways to create a sword but the easiest and most reliable method is by using a forge. By cutting a piece of durasteel into the rough shape of the sword, including the tang, it is then fired in a forge. Once the durasteel is glowing orange, the blade is hammered until the edges are made. The edges are then sharpened. Typically this was accomplished by using what is commonly known as a whetstone. In the current technological era such an archaic method is rarely used and the honing of the blade tends to be carried out by a small laser based device.

The sword has since been replaced on the battlefield by vibro-weaponry and blaster technology. As such, it is most commonly used in ceremonial roles and archaic decorations. 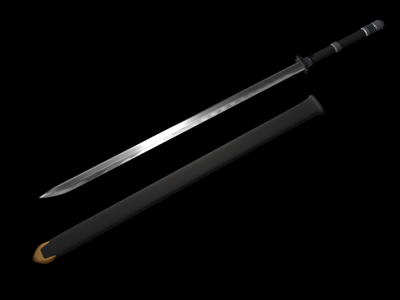