A whip is essentially a length of braided cord, rope, or leather, typically two to three meters in length although this may vary based on the height of the user. The whip’s handle will typically be more solid and wrapped with leather or other material and occupies one end of the weapon. The other end of the weapon, the tip, is the part that is intended to contact the target and may be knotted cords, metal studs, or even small blades. The whip is meant to be swung hard so that the tip accelerates past the speed of sound, resulting in the characteristic ‘crack’ or snap as it breaks the sound barrier.

Whips are not normally used in combat, as the skill needed to effectively use one, as well as the space required to swing the weapon, would severely limit its utility. Despite its drawbacks, a whip can be useful in certain situations. For example, when it is desirable to grapple or otherwise restrain an opponent, an expert wielder can use the weapon to entangle an opponent’s limbs. Apart from this, the whip's appearance in battle is more common among primitive cultures that have not yet developed modern projectile weapons and armour.

Whips have been a symbol of slavery a well as a tool of punishment and torture since ancient times, as they can inflict painful yet superficial wounds. As such, they can be used for extended periods without causing lethal damage to their victim. This enables torture and punishment sessions to be prolonged. 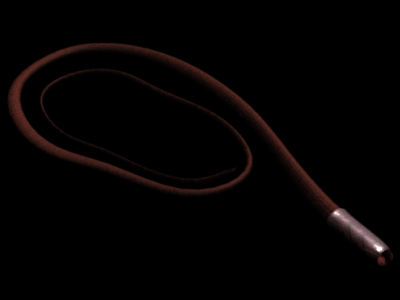