When species began to develop gunpowder, the ancient antecedent of today's modern mass accelerators, the order and styles of war changed drastically. Since gunpowder allowed for the penetration of older shields and armor, remaining agile and unburdened in combat became the best defensive strategy. This change reduced the heavy armors to more concentrated curiasses; the focus turned toward agility and speed, rather than being a walking tank. As a result the saber was born.

The saber is, to be blunt, a sword made for speed. The blade itself is designed primarily for slashing unarmored opponents, and has a sharpened edge down the outward length of the blade for that exact reason. The real reason for its design however has to do with the times it was made, as it was made to be an effective counter to the curiass. While the blade was ineffective against the curiass itself, a slashing attack would often deflect off of the armor and into the opponent, often causing severe injury. The blade is far more devastating in a stabbing attack however, as the curved blade permitted it to wrap around armor, killing the opponent. As a result virtually every sentient species that has developed the saber did so with only minor variations in its ornaments, but with the same devastating design.

With the rise of heavy weapons and blasters, the saber fell from power however. These new weapons made armor relevant yet again, causing the potency of the saber to vanish virtually overnight. The weapon remains in galactic favor however, for while it has diminished battlefield use, it has found another niche for its existence, the honorable duel. While many cultures have outlawed such acts, beings continue into the modern age to settle their disputes with the saber. 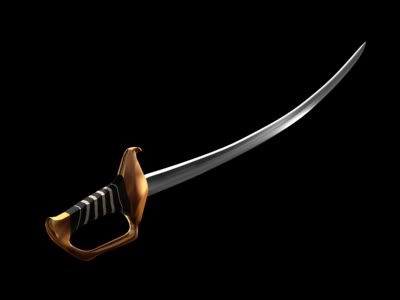