Sentient beings have fought with knives for almost as long as the first one learned to knap flint or shape antler into a sharp blade. Knives are perhaps the most versatile tool devised by sentient creatures and can be used for a myriad of tasks, one of which is combat. The combat knife is, as the name suggests, a knife specifically designed for combat and wielded in a single hand. Different cultures, physiology, and traditions affect the specific appearance and build of a combat knife, but some features remain universal.

The first of these is the blade. A knife is not a knife without a blade. Combat knife blades are normally made of tempered metal that has been forged to give it toughness and hardness, then sharpened to give it a cutting edge as well as an acute point for thrusting and stabbing. The blade will usually be between fifteen and twenty-five centimetres in length, though they may be longer or shorter depending on the physiology and capability of both the wielder and the intended target. The blade shape may be straight, curved or wavy, and single or double-edged depending on the user’s preference.

The second part of the knife is the handle or hilt. As this part essentially serves as the interface between the wielder and the blade, it is just as important as the blade itself. The hilt of a combat knife will be shaped to suit the wielder’s hand and will typically be covered in or made of material that enhances the user’s grip. This is to prevent the hand from slipping when covered in sweat or blood and allows the blade to be indexed correctly in order to deal lethal blows. Some form of guard is usually included as well, to protect the wielder’s hand from sliding up onto the blade when stabbing an opponent.

Certain models of combat knife may incorporate additional features such as a ring guard or knuckle duster designed to enhance the impact of the wielder’s punches, as well as hardened metal pommels to deliver crushing blows during a fight. Although blasters and powered melee weapons now dominate the battlefield, the humble combat knife retains its place in the arsenal of many whose job it is to inflict death upon others due in fact to its simplicity. 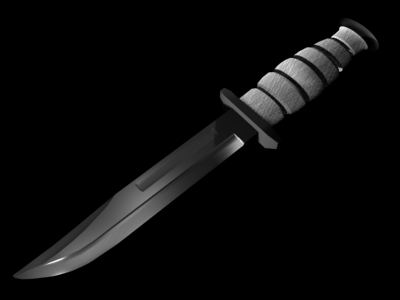