The Model B22 blaster pistol is a unique weapon in the blaster market. Developed by Merr-Sonn before the fall of the Republic, the B22 was marketed to security and police forces as a reliable, affordable sidearm. It enjoyed generally positive commercial success and is a common sight in the galaxy. While not as powerful as blasters such as the legendary DL-44, the B22 is a platform that balances rate of fire and power.

The most unique characteristic of the B22 is its unusual design. The B22 has very few moving parts, leading to an extremely easy maintenance cycle and high durability. The shape of the weapon itself lends to ease of concealment in addition to the handgrip’s ergonomic design, which permits very fast draws and easy stowage. While it is sold with its own holster, it can be slipped into a purse, datapad case, or any other small container and remain undetected.

Many organizations across the galaxy utilize the B22; however, planetary and private security forces, pirates, and assassins remain the most popular user base. The B22’s unusual shape is its greatest strength and its greatest weakness; while perfectly acceptable to most humans, those beings with large or unusually shaped hands (such as Rodians) struggle to wield the weapon effectively. As such, the pistol has experienced less popularity among non-humanoid species. 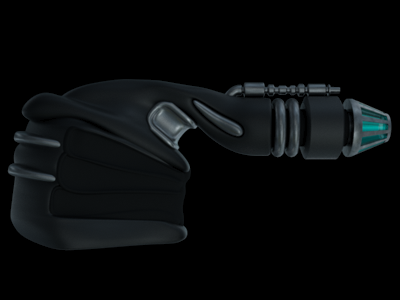