Following the unprecedented success of the A280 blaster rifle, BlasTech went back to the drawing board to make improvements to the design. When the prototype of the project failed to maintain the hallmarks of the platform it was modeled after, the decision was made to adapt the updated design to serve a new tactical role. The A280C was the less powerful, rapid-fire complement to its predecessor. Following the sale of BlasTech Industries to an unknown party circa Year 18, a virtually identical rifle, rebranded as the A295, was marketed by MandalTech.

The A295 occupies a unique niche, placing it somewhere between extreme range sniper rifles and close range carbines in effective firing coverage. The optimized positioning of the handguard, simple stock, sturdy receiver, and precision variable-power optical sight serve to shift the rifle’s center of gravity while lowering its profile. While not the most powerful armament available in its range class, the A295 makes up for its reduced firepower and added weight with its ease of use. The A295 is favored by fledgling hunters and training academies as a prime specimen for honing marksmanship skills. Due to the simplicity and reliability inherent in the rifle's design, the A295 has served as a favorable front-line solution since its introduction to the market. 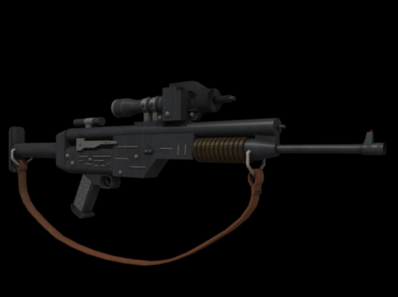