The DY-225 heavy blaster pistol boasts performance that could almost be likened to a light rifle or carbine. Although it is an older model that has mostly been supplanted by more modern designs, the DY-225 still possesses a number of unique features that allow it to project accurate firepower beyond the effective range of most contemporary blaster pistols. This comes at a small cost in hitting power, as the blaster uses a slightly smaller quantity of tibanna gas per shot. This smaller quantity of gas is energised to a higher level than most pistols, resulting in a coherent blaster bolt that outranges most of its rivals and strays into the range of some lower-specification long guns.

This effective range spread makes the DY-225 attractive to some smaller security firms, where cost constraints preclude providing recruits with both a rifle and a pistol for close-range backup. It also remains a favourite with outlaws and frontiersmen, for whom the ability to reach targets beyond the range of most other sidearms is a matter of survival. Merr-Sonn Technologies still maintains a production line for these blasters, periodically manufacturing a small number of DY-225s to meet demand. The pistols are also relatively easy to repair and maintain – a positive trait that sees this weapon in relatively common use despite its age. 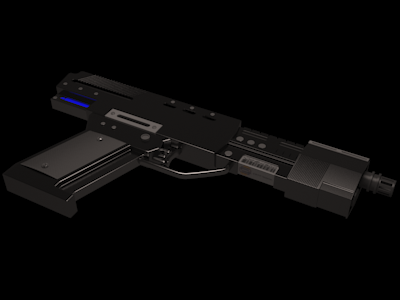