Many might wonder at the niche occupied by the BD-1 Cutter when vibro-axes are already fairly common powered cutting weapons. A BD-1 can, in truth, be used in a similar fashion to a vibro-axe, in the same way one could use a butcher's knife as a paring knife to skin fruit. A BD-1 does feature a broad, cleaver-like blade of similar proportions to some vibro-axe blades, but here the resemblance ends.

The BD-1 features a segmented two-meter long durasteel shaft, which is much longer than the haft typically found on vibro-axes. The motor and vibration dampeners are concentrated behind the head, while the power supply may be moved to different segments inside the hollow shaft, depending on the preference of the user, thereby providing a degree of flexibility not normally found in any but the most expensively crafted vibro-axes. The pointed tip of the BD-1's blade also extends beyond the end of the shaft. This, together with the optional spike at the end of the shaft, can make the BD-1 an effective thrusting weapon. A strong wielder could even use the weapon like a staff, blocking blows and delivering attacks with the shaft of the weapon. Some users might even install a spiked buttcap to enable thrusts to be carried out with the butt end of the weapon.

All in all, the BD-1 Cutter is a highly effective vibro-weapon that is well worth a place in the arsenal of crimelords, mercenaries and planetary militia alike. The weapon is frequently found in Outer Rim territories, where blaster weapons may be harder to obtain and the fear factor associated with being chopped into small pieces by cutter-wielding thugs is important for maintaining the local crime lord's grip on an area. 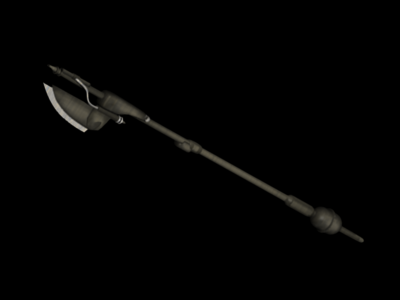