A rifle designed with reliability in mind, the MG-15 is often used for fighting in locations where standard issue weapons struggle to perform in adverse conditions. This makes it popular with both special forces and regular troopers who expect to find themselves fighting in hostile environments.

The MG-15 Carbine, also known to weapon connoisseurs as the RT-97C Heavy Blaster Rifle, comes equipped with three separate scopes, making it a versatile weapon. A thermal scope helps in finding and targeting any targets giving off heat. Its second scope automatically calculates range and adjusts the collimating element, increasing the user-friendliness of this rifle. Lastly, a passive infrared scope, giving increased vision in rain, dust, smoke, and darkness, helps this weapon operate in environments where vision is restricted. In addition, the increased barrel length gives the MG-15 superior firing range over more traditional rifles. This, in conjunction with above average firepower, causes it to be considered by many to be a heavy blaster rifle. All of these features do, however, have their drawbacks in weight and size, with many users complaining of the cumbersome nature of this weapon.

This heavy blaster rifle finds itself in the hands of troops operating in challenging conditions all over the galaxy. While the average soldier has complaints about its cumbersome nature, units stationed in difficult conditions are often said to praise its versatility and reliability. 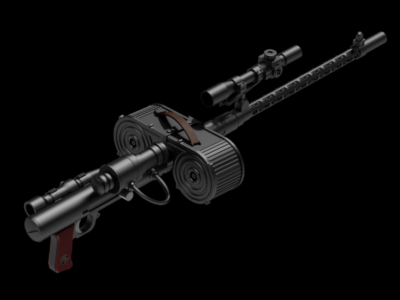