The DLT-20a is a medium-weight blaster rifle designed for ease of use in a variety of scenarios, from close-quarters to ranged engagements. The weapon has a number of features that make it convenient for the user, including an adjustable stock and a wide-angle electronic ranging sight for quick acquisition of targets. To save on cost, the DLT-20a is air-cooled, featuring a perforated sleeve surrounding the "longbarrel". The handgrip can be adjusted with spacers to accommodate a variety of hand shapes and includes a magnatomic adhesion feature. This makes it especially useful to dextrous combat droids.

Internally, the weapon features an enlarged Heter-valve and fortified accelerators, which are capable of generating blaster bolts comparable in power to many heavier rifles. The DLT-20a is also provided with a fire selector, an unusual feature on a weapon in this price range. While not capable of generating the volume of fire some repeating blasters can, it is a useful feature to have in combat. The manufacturers also included an adaptable power cell housing, which enables the user to configure the interface to accept a variety of different energy cells.

The DLT-20a was originally developed by BlasTech Industries, as were a great many weapons in use throughout the galaxy. Since the disappearance of this corporation, the production rights have been acquired by the Krath. The overall design has largely remained the same and a new DLT-20a is indistinguishable from the older models. 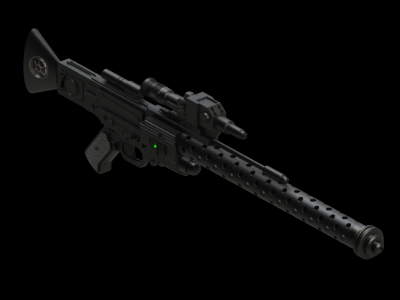