When Blastech was designing their experimental new blaster pistol long before the fall of the Old Republic, nobody envisioned it would become so popular. Intended for a younger audience of first-time blaster owners, it was designed to be simplistic, easy to use, and affordable to the common folk. The blaster would soon become a household name and one that spanned all class systems, rich and poor. The DL-18 was considered to many to be the grandfather of all modern blaster pistols.

The DL-18 pioneered features that would become standard in other blaster pistols in the coming centuries. For the first time, the power cell was inserted into the back chamber of the blaster pistol instead of the hilt. There was a small power cell adapter on top that doubled as a counterweight, keeping the weapon balanced along with having a reserve emergency charge for the blaster. One of the more unique features is the end of the blaster barrel had a small laser pointer at the bottom that could be flicked up and locked into place for ease of aim.

The DL-18's new features launched an explosion of innovation across the industry that ironically caused the model to quickly be considered obsolete. Most models produced soon after could boast a higher energy capacity and were lighter weight than the famed predecessor, and the innovative back-loading power cell was often known to become stuck after extended periods of use. With so many inexpensive blaster pistols entering the market, the DL-18 was cheaper to replace with a newer model than repair and thus was quickly eclipsed in the public's eye.

The DL-18 was considered a major financial success for Blastech, and the blaster pistol becoming a household name. It is best known, however, for launching the wildly popular and successful DL line of blaster pistols. After several centuries, the patent expired and the design had become available to any corporation willing to produce the blaster pistol. It can still be found across the galaxy in the holsters of upstanding citizens and criminals alike. Most notably, the nobles of the Tapani sector still use them for status and competition, with some using them in duels to settle disagreements when all other methods have failed. 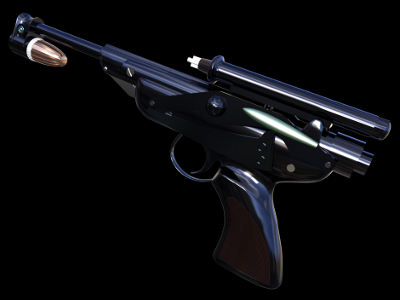