BlasTech's DH-17 Blaster Pistol is one of the most common sidearms found in the galaxy. Used by multiple governments as standard navy issue and by freelancer pilots, the DH-17 is often simply called a 'blaster.' Despite its wide usage, on most planets it is illegal for individuals to carry these weapons unless they are part of the governing military.

Designed primarily to aid in shipboard combat, the DH-17 is powerful enough to penetrate most types of body armor but was also created in such a way that its bolts aren't quite powerful enough to puncture the hull of space-faring vessels. Standard weapons hold enough gas for 500 bolts to be fired, though the standard power pack has only enough energy for firing 100 bolts before it needs to be replaced. Fortunately power packs are inexpensive and small enough for the blaster's user to carry multiples and the recharge time for a single pack is fairly quick, taking about half an hour.

Due to the fact that purchasing, maintaining, and modifying these weapons can be done rather cheaply, the DH-17 has found use in a number of different locations of extreme environments. The ability to set it to full-automatic is another popular design feature that has proven a boon for its wielders, but many rookies have discovered, unfortunately in the heat of battle, that doing so can deplete the weapon's entire clip in just a few minutes. 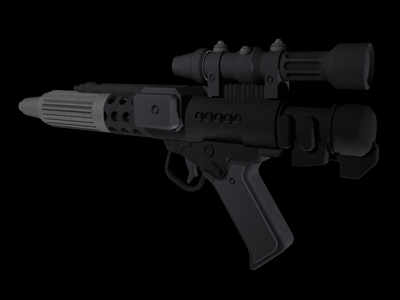