As newer governments were starting to form in the aftermath of the First Galactic Civil War, many started to put out military contracts for a new kind of repeating blaster that was cheap and reliable to use. One of the weapons designed and given field testing was the T-21 Light Repeating Blaster, born from the minds of several Coruscanti that had used similar experimental weapons in the military. Using their newfound connections in the underworld of Coruscant, they secured financing to produce limited quantities of the T-21 Light Repeating Blaster to hand out as free samples to new aspiring governments. This form of free trials secured several military contracts and was able to launch a profitable business.

The T-21 Light Repeating Blaster has several remarkable features that are very distinctive to its own design. The power pack is aligned on the top, with the power generator feed option right behind it. This was done in case the light repeater needed to be mounted as a stationary emplacement for defense. The barrel is also considered rather strange as it has multiple moving parts yet is rather cool to the touch. This was due to the cooling vents around the focusing coils that were concentrated throughout the entire barrel design.

It is not, however, without its unique flaws, one of which is how large and cumbersome the weapon is, making it rather awkward to carry. While the option of a tripod is included, it weighs down an already cumbersome weapon and is generally removed before deployment. Along with its storage problems, the barrel is so complex that if it sometimes malfunctions, causing the light repeater to stop working. One of the most glaring problems is the rate of fire, firing only a single bolt every second which is rather slow for a light repeater. 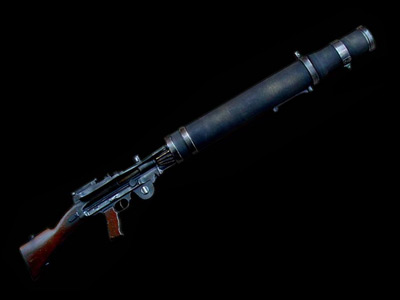