The A280 blaster rifle was developed just after the First Galactic Civil War by BlasTech. While originally developed as an easily mass-produced service rifle for planetary governments devastated in the war, the rifle was an immediate success with many other groups, including freelance operatives of all kinds, bounty hunters, and mercenary bands. The A280 is well-regarded for its stopping power and high range. As a result of the weapon's firepower, some governments across the galaxy have strictly regulated the use of the A280 in an attempt to keep it out of the hands of those who would use it for ill. Despite restrictions, the rifle is still a common sight in the hands of shadier paramilitary and criminal groups.

The A280’s high in-class stopping power and exceptional range is due to its large, highly efficient electromagnetic accelerators. Rather than placing a more powerful system into an existing receiver and potentially causing problems, the A280’s casing was specially designed to accommodate the magnum accelerator assembly. To compensate for the heat of the rifle’s electronics, the shell is forged of a thicker durasteel than normal. This, in addition to the bulky housing to protect the midsection from being damaged, has led to the blaster being relatively heavy for its size. Despite the weight, the powerful blasts coming from the muzzle creates a punishing recoil, which is poorly mitigated by the rifle’s uncomfortable skeleton stock. The rifle is also prone to overheating under sustained fire and requires frequent replacement of its power cell.

In the galaxy of today, the rifle’s drawbacks are oftentimes overlooked due to its more desirable traits of firepower and range. The A280 has gained popularity across all walks of life. It is most commonly seen in the hands of bounty hunters, mercenaries, pirates, and governments. The rifle is best suited for long-range sharpshooting, where it can reach out and strike targets who can’t return fire with smaller carbines. 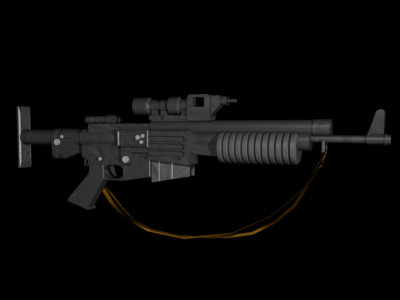