The question of how to improve upon a beloved icon such as the DL-44 was put to the test after the release of the weapon was touted through the Holonet. The Corellian-based company drafted a new design aiming for a reduction of recoil and mass, becoming easier to hold and easier to draw. The result was what was considered an old-style blaster that could generally only be found in the Outer Rim, the DL-56. The marketing campaign was focused on a newer clientele: those wishing to purchase a new blaster and to showcase the frontier feel of the new model.

The design of the DL-56 was radically different from the DL-44, principally in a reduction of bulk. Most of the iconic look of the DL-44 was renovated, along with the power cell being loaded at the bottom and the removal of the scope. A box-like housing instead was positioned just above the grip, having a special mechanism to pop the power pack out from either side for easy ejection and replacement. The barrel, along with most of the design, was made to be streamlined, its accuracy was not diminished and it was much easier to pull out of the holster than the previous model.

There were some notable flaws, however, one being that it was less powerful than the DL-44 model. While it succeeded in having less recoil than the previous design, it lost power coils in an effort to reduce mass. The grip was also changed from its simple broom-handle design to a more angular shape that could easily slip out of one's hand if not careful. Due to an overheating issue when fired in quick succession, the barrel was made of pure durasteel, meaning that the weight was ultimately comparable to the DL-44.

The DL-56 was considered a commercial failure, not achieving the expected improvements over the previous model. While it did not get much attention from the civilian market, it gained a lot more military attention from high ranking officials who needed a blaster that could be drawn quickly in a firefight. The entertainment industry also took an interest, as Outer Rim style films and shows started using the DL-56 for a blaster prop, some being modified with cylindrical power packs. Occasionally, social elites use them as duelling blasters, to settle disputes that cannot be resolved any other way. 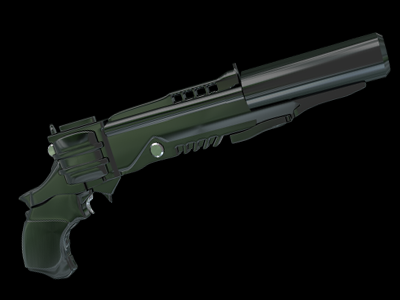