The COO Cook Droid is one of the most innovative, if somewhat odd looking droid designs of all time. The original specification was to design a class five droid, which could be used to replace sentient labor in large scale catering operations. Publictechnic collaborated with Industrial Automaton and the COO Cook Droid was developed.

The COO Cook Droid is distinctive and seldom mistakenly identified due to its chaotic configuration of a dozen or more arms, which could all be fitted with separate tools and appliances. The design of COO Cook Droid complemented this veritable arsenal of culinary utensils, with an olfactory sensor which could literally sniff both ingredients and finished food products to discern freshness and edibility.

The droid was mass produced to be a cheap alternative to sentient labor for cost conscious applications such as military mess halls. Unfortunately, this lead to two distinct design flaws. Firstly, the droid was criticized for its lack of robustness and generally poor build quality. Secondly, and more importantly, units were only configured to prepare a few hundred separate recipes, which was too limited to give long term owners sufficient variation in their dining facilities. Though the droid's software package is modifiable and after-market kits are available, upgrading is often deterred because of the tedious and complex process. 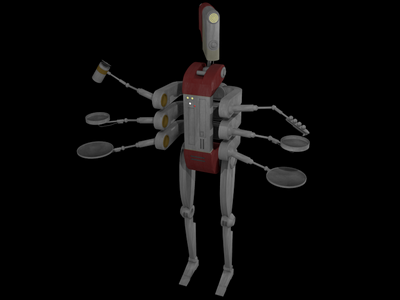