Originating on the industrialized planet of Asher I, the 3PO Protocol Droid is one of the most advanced means of human-cyborg relations on the market. The droid is programmed to have an obedient, service-oriented personality and can never attack another being, even in self-defense, unless its coding has been modified.

With a primarily humanoid market in mind, Cybot Galactica designed the 3PO Protocol Droid to have the physical form of an average human. Several studies indicated that humanoids are more comfortable with such an appearance for social interaction and communication. Their metal plating comes in a wide variety of colors, the two most common options being gold and silver.

Borrowing from their competitors, a SyntheTech AA-1 Verbo Brain is used as the core of each droid's artificial intelligence, which allows them to store an immense amount of information. Their TranLang III Communicator module allows the 3PO to comprehend over six million languages spoken by organic lifeforms, machines, computer systems and other droids. With so many languages to store, much of the Verbo Brain's capacity is used to keep communication modules active at all times so that delays can be avoided while searching for linguistic information during translation. The only limitation is borne of their TranLang III Vocabulator, as it was designed with the intent of mimicking audible tones, failing to incorporate semantic components into the droid's communications, making the droid unable to understand typical humanoid behavior such as sarcasm.

In order to allow easy control by the owners, 3POs are produced with a factory-installed mount for restraining bolts and a shutdown switch at the nape of the neck. This can be especially valuable when the droids are overly talkative, as many find them irritating. In addition to their talkative tendencies, their lack of an efficient gyro stabilizer can be an issue, keeping them from being employable in more menial capacities. Despite these setbacks, these humanoid translators continue to be considered the epitome of dependability and mechanized companionship. 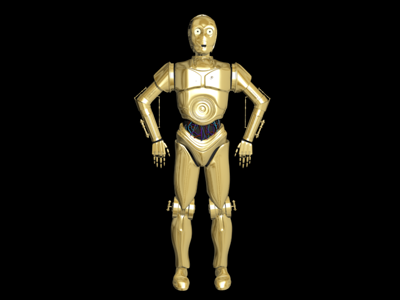