The Prowler 1000 is a compact probe droid created primarily for surveillance and exploration. When deployed on an unexplored planet, the Prowler is able to record its surroundings and run a variety of tests using the multitude of sensor suites programmed into its system. Though such work remains the droid's primary function, it has proven useful in a variety of other roles.

The Prowler is equipped with a vast array of sensors and features that have led to its reputation as a highly effective, multipurpose security droid. Several photoreceptors are incorporated into its design, all of which feature multiple magnification and spectrum settings, allowing for detailed observations of light, heat, and movement. This makes the Prowler a popular choice for reconnaissance among military personnel, and security forces have taken advantage of the Prowler's advanced pathfinder algorithm, adapting it for use as a surveillance unit. Additionally, police forces have adjusted the Prowler 1000 for their own purposes, using the enhanced sensors and chemical testers for forensics work and search and rescue missions.

The Prowler design also incorporates a pair of small, mechanized arms which can be used to manipulate objects or levers and simple controls. Unfortunately, due to the small size of the arms and the meager repulsor output, the droid is only capable of carrying the smallest and lightest samples and objects. This prohibits the attachment of any weapons and greatly hampers the Prowler's usefulness in defending itself while exploring.

The Prowler 1000 is a common droid used in a wide range of occupations throughout the Galaxy. The droid is a useful tool for scientists, military and security personnel, holo-journalists, and anyone needing a relatively inexpensive means to obtain accurate visual and physical observations. 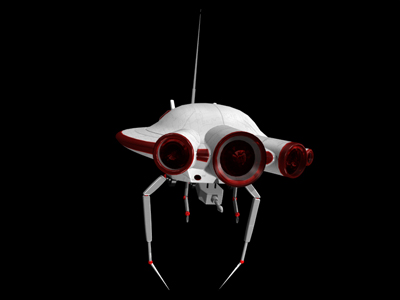