The symmetrically constructed halves of the magnificent Golan Station, Mark 1 are embellished with the central tower, adorned with a gleaming beacon. First built during the Stark Hyperspace War towards final years of the Galactic Republic, the Golan I, or also commonly known as the Golan Space Defense Gun, was principally used to defend key planets, outposts, ship yards and hyperspace routes from intruders. Making numerous appearances in notable battles from the time of the Clone Wars through the rise of the Galactic Federation of Free Alliances, the Golan I has been classified as the first space station created by Golan Arms' series of space defense platforms, but is now developed individually by other manufacturers.

With this station’s ability to accommodate fighter squadrons and dock with capital ships from either sides of the symmetrical structure, quick deployment upon positive detection of enemy movement from the sensor array is made possible. In addition, the strategic placement of the six tractor beams reduces the risk of accidents and tractor beam obstruction, thus allowing for a high traffic control capacity. Additionally, several key features of the Golan I contribute to its effectiveness in serving as a supply platform or a service station when the need calls for it.

Superiority in firepower is not a key feature within the Golan I. Although its five proton-torpedo launchers harnesses adequate explosive damage on enemy ships, the slow reload and fire ratio allows for the potential that the space station could be overrun with several attackers at once, despite the support of its turbolaser batteries.

One of the main critical flaws and complaints with the Golan I's design is the placement of the shield generator, which is located at the base of the spike enclosing the sensor array. The unguarded perimeter of this component on the station has proven to be a detrimental weak point that can be exploited by clever enemy commanders. Significantly, the destruction of the shield generator renders the competent telemetry of the station’s weaponry system useless. Indeed, this was the main reason, in concurrence with the conclusion of the Clone Wars, which fueled the necessary innovation for designers to produce even larger and more powerful war-based stations. Despite its shortcomings and subsequent improved models, the Golan I was the foundation stone of a new technological revolution and is still regarded as a priceless platform. 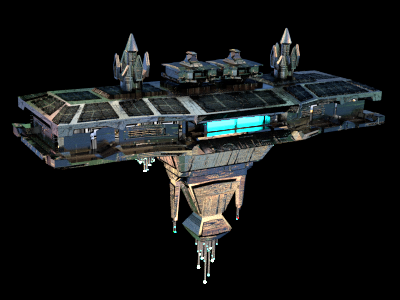