The Asteroid Hideout is nothing short of a marvel in the realm of space stations, in most senses it is the exact opposite of general stations in that the entire structure is readily available. Without the need for an exterior superstructure the main effort during construction is removal of the asteroid's interior mass and installation of the various facilities and systems, often recycled from older decommissioned starships to reduce cost. Despite a length that averages about 400m the hideout has a relatively low interior capacity, mainly due to the lower density and integrity of the natural rock compared to ordinary superstructure materials, and as the station in general has a defensive role it is constructed this way to give strength to it's hull.

Asteroids are a relatively common sight in the galaxy, but stealth properties for visuals alone is not adequate to prevent the station from detection. A complex array of jamming and signal distortion systems, in conjunction with numerous exterior transceivers scattered across it's surface, renders the station undetectable to all but the most persistent individuals and organizations. In addition to these counter detection efforts the owner has one of the most powerful sets of scanners at his disposal, leaving more than enough time for a safe retreat should the station be revealed and evacuation necessary. If the threat is not too severe the station can launch missiles and protect itself from smaller ships with two powerful quad laser turrets, and even launch a small group of fighters from it's modest docking bay. The limited capacity of the bay is viewed by many as one of the major disadvantages, despite being a trade off for a durable hull. As an absolute last resort the station is fitted with a number of escape pods.

Of the few stations discovered by law enforcement, where evidence has been released, most seem to have been used by smugglers and criminals, often as relay or meeting points. It is not unlikely that smaller businesses operating in unstable regions of the galaxy invest in Asteroid Hideouts for a safe retreat should they find themselves subject to dangerous circumstances. 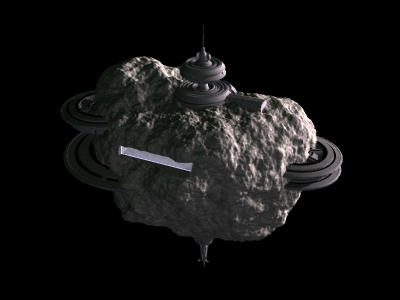