The Golan II is the successor to the original Golan I Space Defense Gun, an orbital weapons platform predominately used to defend small planetary outposts and space facilities such as shipyards. Though the Golan I had a unique reputation, the Golan II was an inconceivable revelation that came to dominate the orbital defense market.

Boasting improvements from its predecessor's design to several critical aspects of the platform, the Golan II can be used to defend far more valuable targets, including transports, construction shipyards and trading stations. In particular, it was station's sturdiness during battle led to its rapid rise in popularity and the continued frequency of its appearance across the galaxy. Renowned as a priceless tool in unyielding and tense situations, the Golan II remains preferential to many fleets and it would take the combined efforts of several squadrons of fighters and several freighters to neutralize a single Golan II.

Though the Golan II design and function was based on the same general principles as its predecessor, improvements include its hull's unique crossbeam structure support system to increase durability and more efficient power generators which allowed for a significant increase in shield power. One of the more critical flaws with the original defence platform was the unguarded and imprudent shield generator, which was poorly located at the base of the spike enclosing the main sensor array. A well executed strike by the enemy could destroy both the shield generator and sensors in a single effort. The Golan II overcame this previous design shortfall by re-mounting the shield generator at the base of the new command tower, which lay at the centre of the platform, as opposed to the gleaming beacons on the symmetrical halves of the station. The change substantially increased the difficulty of targeting and destroying the shield generator before the intruders could be driven off or overwhelmed and destroyed.

Furthermore, the Golan II marks a substantial enhancement in size over its predecessor, approximately seventy-five percent more, which contributes directly to the ionic capacity of the platform. This increase also enables additional docking ports and hangar bays to be included, thereby facilitating more fighters to compensate for a lack of anti-fighter weapons. The life support systems on the Golan II can accommodate almost twice as many passengers as the Golan I, with long residential compartments situated on the upper level of the station. Whilst this includes common areas with dining halls and entertainment quarters, the lower deck is occupied by storage bays and power systems. The isolation allows structural organisation of daily functions and a comfortable setting for long periods of time spent in space.

In addition to these advancements, sensors are almost three times more powerful than the Golan I, drastically improving the much needed telemetry and computer operations. Two extra tractor beams further augment the design and reduce the hazards of transporting cargo containers and starships. The Golan II houses additional proton-torpedo launchers and turbo laser batteries and the service and reload times of each were reduced due to better planning. Thus, larger waves of fighters, freighters and capital ships could be resisted.

Even with the innovative improvements of this station by Golan Industries, the Golan II has been judged by many to be incapable of countering the threat of larger ships, such as Star Destroyers, and thus inadequate for high-traffic zones. Rumors that its successor, a Golan III model, is under development are rampant. Despite its inadequacies, the Golan II space station is a large improvement over the previous design, and certainly a practical and worthwhile addition to any defense system. 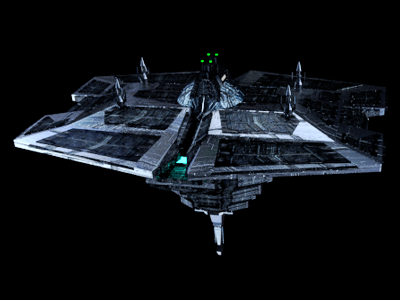