Located in the Corellian Sector, Centrepoint Station is speculated to have been constructed thousands of years ago by the Celestials, who are also the purported creators of the Maw. The station's original purpose is still debated. While some claim that it was built to house a mysterious being known as Abeloth, who had supreme control over the dark side of the force, others feel that it was simply a tool to further the Celestials' vast power.

Regardless of its origins, Centrepoint Station's construction is legendary. It was built before artificial gravity was invented, so at one point, it rotated to simulate gravity. Several large powerplants supply enough power to operate the station, but Centrepoint was also able to tap into the energy of entire worlds. Slaving repulsors stationed on planets in the Corellian system to the station enabled it to multiply its power output up to a thousand fold. With this vast energy supply, Centrepoint was able to use mammoth tractor beams to capture and destroy entire planets and suns that were lightyears away from it. It has even been speculated that the station's tractor beams were used to form the Corellian system. There is also documentation to suggest that the space station was, at one time, able to deploy an artificial gravity well around itself, preventing hyperspace jumps. Indeed, Centrepoint was once considered a truly deadly super-weapon.

Rebel forces captured Centrepoint Station during the time of the Old Republic and attempted to fire the tractor beam system, only to find that it would not function. Later, they discovered that the large tractor beam array had been sabotaged, rendering many of the station's past functions obsolete.

Though hobbled, Centrepoint Station's heavy lasers, ion batteries, and smaller tractor beams still make it a formidable defensive weapon. Regardless of its militaristic capabilities, in modern times Centrepoint has acted as a galactic trading hub. Its cavernous spherical center gives the station's operators the ability to store large amounts of goods, ships and other entities and creates an almost overwhelmingly large environment for commerce. Newer generations of owners have also added a huge number of escape pod bays throughout the station, giving Centrepoint's entire contingent of passengers the ability to escape at once if necessary.

While it was once used as a great weapon, Centrepoint Station now brings sentient beings with common capitalistic goals together. Its grandiose, colorful history has been nearly forgotten, but if Centrepoint's primary weapons were ever re-enabled, it would certainly be feared throughout the galaxy once again. 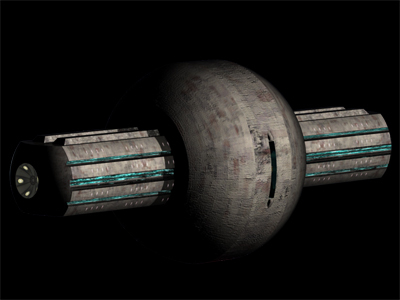