Greater cargo space has multiple advantages; for the colonists and administrators, it directly translates into an increased reserve of supplies, decreasing the cost of losing a supply ship to the myriad dangers of space. For transient spacers, these stations can be enough to stash a small, hidden reserve of supplies and credits to serve as a seed in the case they lose everything. Some enterprising traders might even set up a small starship exchange to generate additional capital before making the plunge into the greater market. Administrations of smaller systems will often use these stations as hub points until enough credits and resources can be acquired for a larger, more specialized station.

Despite its upgrades, the Space Colony II also shares the same weaknesses and disdain of its smaller predecessor. Its lack of weaponry hampers potential usage by fringe explorers and larger governments and, even with its upgraded cargo capacity, the limited space and lack of specialized systems drive traders to seek more trade-centric stations. However, just like the Space Colony I, the uses of Space Colony II are varied; many sponsors and administrators often develop unique attractions on these stations, especially since the cost of investment is low. 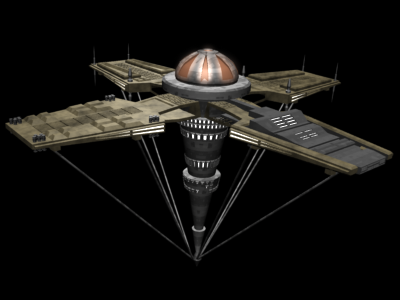