The engineering team chose the XQ-1 as a starting point of their design for several reasons. Chief among these was the speed at which large and small starships could dock with the station. A docking bay within the center of the station allowed for landing near, and quick access to, treatment facilities. The docking bay opened in three separate directions, each leading to one of the three pylons arranged around the center axis of the station. Larger ships were able to dock at the ends of each pylon and an air tunnel would be connected to the ship for the transfer of patients.

While the XQ-1 also has a considerable amount of space available, a choice was made to scrap the vehicle hanger bay and some weapons systems, including the tractor beam, to provide an area large enough to incorporate three fully-functional medical rooms in the XQ-2. There was some debate as to whether or not the tractor beam should have been removed, but it was noted that the docking capabilities of the XQ-2 would allow the station to field its own rescue craft in situations where a crew was either incapacitated or unable to dock with the station for needed medical assistance.

A strong sensor package will alert the hospital station to any danger, and it can also detect ships limping into the system seeking medical attention. Starships, such as Sprint-class Rescue Crafts, are then dispatched to provide emergency care and stabilization. A modest compliment of weapons including heavy lasers and turbolasers provides minimal protection, but are intended to purchase enough time to call for help.

No expense is spared in the construction of the Hospital Platform XQ-2 and it boasts some of the most advanced medical technologies available. A large database in the station's computer system provides medical information for a plethora of different races. Many doctors and medical technicians galaxy-wide seek positions on these stations as they are the premier centers for health care services in space. 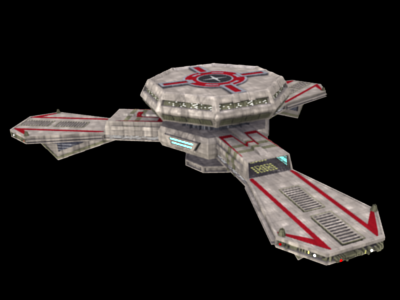