The advantage inherent to space-based trading stations has been obvious from the furthest reaches of history. Because of the savings in time and fuel, when compared with landing and launching from a planet's surface, ship captains have always preferred to trade with merchants in orbit. One of the oldest and most common station designs for orbital commerce is known simply as the Trading I, or T1.

The T1's structure is arranged along two perpendicular corridors. Its vertical corridor provides access between the areas responsible for the running of the station. From the bridge at one end, to the engineering compartment at the other, members of the station's crew are never more than a few minutes away from anywhere they are needed. The station's horizontal corridor is flanked by two docking ports, which allow ships much larger than the various YT classes to connect to the station. The docking nexus sees a constant stream of pedestrian activity, and various shops and merchant booths line the corridor towards the central docking bay. While the bay is only capable of holding a few smaller transports, it is often used to unload shuttles which carry cargo from larger freighters and capitals, which leaves the station's two docking ports clear.

With relatively light defense, the T1 relies on other stations and ships for protection. Five heavy lasers act more as a threat to keep the occasional unruly trader in line, rather than as a serious station defense. In fact, the station was designed with so few sensors that it cannot even detect ships at the maximum range of its weapons; instead relying on satellites and friendly ships to help target threats. Though the station is able to support defensive fighters in its docking bay, station owners rarely take advantage of this capacity, since they prefer to have more space available for paying customers.

The smallest of the trading stations by a substantial margin a single T1 is not meant to be the sole location for trading services. Typically, several Trading I stations in combination with a few of their larger cousins, the Trading II station, are enough to accommodate most systems. When this station is found by itself it is usually as an out of the way meeting point. Small and relatively inexpensive single copies of this station are often constructed in deep space and used as rendezvous points for pirates and smugglers, allowing them to exchange goods and services well outside the reach of the law. 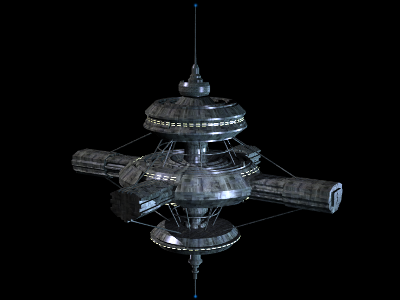