Originally built to defend production and mining operations on a nearby planet, Petabys Station is a former FireStar-class defense station, located just off the Great Gran Run in the Mid-Rim. Due to financial and operational issues, the previous owners sought to sell the station. Unable to find a buyer in their price range, the sellers relinquished ownership to a disreputable party for a cheaper price.

When Rendili StarDrive built the station, the engineers endeavoured to design a station that was robust and versatile. A high-end sensor package was included in the design, making the station capable of detecting any ship within its system. In addition to this, the combination of laser cannons, concussion missiles and a complement of fighters is enough to defend the station against a small fleet.

Despite a reputation for impenetrability, there are still those intent on trying to find an exploit in the station's defences. One such group of bandits gathered together a collection of light freighters and a squad of R-41 Starchasers. The plan was to hide the fighters behind the freighters, later using the fighters to distract the laser canons. The freighters were then supposed to "fly in hot" and retrieve as much cargo as possible, before escaping just as quickly. Rumor has it that the bandits lost in their attempt to raid the station. Most of the craft were destroyed in the fighting, but the remaining few were captured by station crew. These ships were later repaired and auctioned off. Little is known about the bandits that survived, but frequenters of the station say they have been forced in to servitude and can still be seen performing menial tasks throughout Petabys.

With the latest owners, Petabys Station is now used as a location for a black market. Some alterations were made to include bars, kiosks, and small commercial spaces; however, all defense and sensor packages were kept. The bays were expanded to accommodate freighters, rather than the small shuttles it was initially designed for. Privacy and protection come at a heavy price, but with so many sales, trades, and back room deals, it seems that sentients believe the steep price to be worth it. 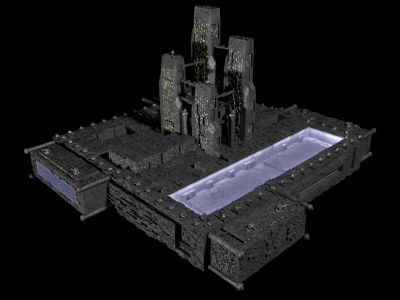