Located in orbit of Ord Mantell, Tansarii Point was designed and built as a standard Nova Orion-class station. The station has a dubious history with ownership changing hands many times prior to ending up with the Car`das. With its characteristic U-shape and four-tower configuration, Tansarii Point is similar to many of the other stations in the Bright Jewel system.

The main internal structure is divided into three levels, the lowest of which is used to store the goods that the Car'das trade all over the galaxy. There is also a repair centre and droids available for a range of services, such as general station maintenance and goods delivery. It is rumoured that station's servers on this level hold a variety of confidential information. This includes anything from transaction records, to coordinates of hundreds of undiscovered systems, some even in the Unknown Region, and the secrets of many local and galactic governments.

The middle level, considered to be the true heart of the station, is where visitors spend the majority of their time. There are two docking bays located at the end of each U-shaped section which allow for easy arrival and departure. Visitors also have access to secure booths for their more private business in the Tensarii Point Cantina, where entertainment and drinks are also served. A medical bay is situated just half a corridor away from the cantina, often seeing heavy usage when the cantina's atmosphere is fired up. The most important area on level two is the Station Master office, where most of the station's 'official' business is done.

The upper level is known as the Atrium, which is a big central chamber surrounded by smaller rooms used as living quarters by the Car'das, where only the most trusted visitors are allowed. In the Atrium's central chamber, several gambling tournaments, such as Sabacc and Pazaak, take place among the station's elite.

Although from an outward appearance the station may seem vulnerable, this is just a pretense to deceive attackers. The Car'das have made a number of modifications to the defensive capabilities of the station, such as striking a deal with some black market contacts to install a vastly superior sensor package in the station. While this allows them to detect any potential threats that enter the system, the actual defense of the station is left to an enhanced deflector shield and the three starfighter squadrons stored inside its docking bays. To avoid the complete loss of defense by a single hit, both sensors and shield generators have been decentralized to the dorsal and ventral towers. 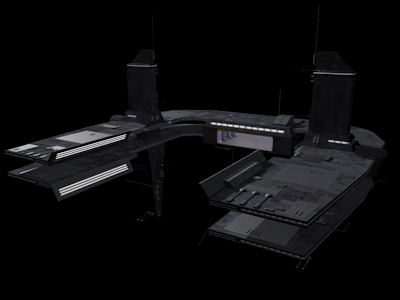