Abek's Station is a hidden spaceport, commissioned and owned by the infamous pirate, Nim Abek. As security is a priority for the station's owner and its patrons, the only persons with knowledge of its location are those personally invited by Abek.

A commonly held belief is that Abek's Station is located along the Sisar run, which is a trade route connecting the Tharin sector with Hutt space and the Sespe system. It remains hidden, however, concealed and absent from any map, while proving to be an excellent staging point for raids on the many heavy cargo ships traveling through nearby hyper routes and star systems. The station is not armed, but is defended by a fleet of hundreds of pirates and mercenaries, many renowned for their skills in space combat.

The layout of Abek's Station is divided into eight huge segments. The lower four levels, with the exception of engineering on level one, are available for guests to visit and use. The remaining levels are reserved for Nim Abek and his pirate crew.

Level one, also known as "The Pit," contains the station's reactor, gravity generators, public storage and fuel cells. Only station personnel are allowed to place items into the storage containers, or to retrieve them. The majority of prisoners and slaves are also kept on this level, typically working in harsh conditions.

The second level contains accommodations for Nim Abek’s clients and his bar, "The Thirsty Monoc." The third level houses the public docking bay, which is monitored by a sophisticated and extensive surveillance system.

Level four is comprised of a large arena. Nim Abek entertains himself and his guests by pitting prisoners against some of his favorite beasts from across the galaxy. Disloyal members of Abek’s crew are also sent into the arena, perhaps explaining his pirates' fierce loyalty.

Ships used for raids and the crew's personal craft are berthed and supplied in a massive docking bay situated on the fifth level. Level six contains a private lounge, kitchen and quarters for those loyal to Abek. Stolen starships are placed in “The Chop Shop,” located on level seven, and are stripped down for parts or cleaned and repaired for future service.

The highest level of the station, its eighth, is smaller than the others, and contains Abek’s private quarters. Very few individuals are ever allowed inside.

As incursions along the Sisar run have become more frequent, various governments have responded by offering bounties on those thought to possess information about Abek's Station and its location. Collecting on these bounties has proven to be a challenging task. One group of bounty hunters was rumored to have ascertained the location of the station through numerous contacts and bribes, but are thought to have been killed before they could tell anyone.
« Back To Top 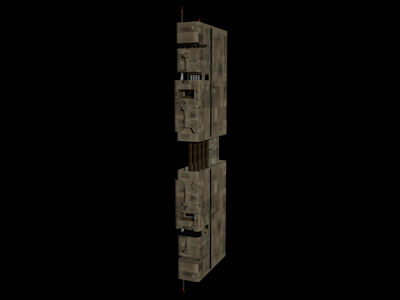