The presence of this type of station is an indication that a system has arrived, commercially. Normally found where economic activities abound, these stations serve as hubs for buying and selling, transshipment, deal-making, and all manner of trading activities. Billions of credits can change hands monthly on a well-managed trading station – as all Trading II stations tend to be. Many owners rely on specialist management services to keep the stations in top condition.

While the design of many stations may vary based on the whims and fancies of the architect, many also follow a template based on the corporation managing them. No matter what the station may look like on the outside, and there are some truly ostentatious designs on display, especially in the more developed systems of the Core Worlds, Trading II stations have a number of features in common. All will have multiple communications arrays to keep the community apprised of the movement of goods, equity, and bonds in numerous important markets, as well as branch offices of major galactic and local banking institutions to facilitate swift financing of deals and guarantees on collateral. The stations are also typically home to elements of many criminal organizations that specialize in financial crimes, although this fact is seldom publicized. Typical Trading II stations also have significant storage and warehousing facilities, although trade goods will normally be stored in nearby depot stations. These stations will also host multiple conference calls as well as housing secured meeting rooms for private deal-making sessions. Many luxury brands also establish outlets on these stations to facilitate impulse buying by people who have just made successful deals, or those wishing to purchase gifts for the numerous hostesses, escorts, and sentients-of-easy-virtue that ply their trade aboard.

With the concentration of wealth typically associated with stations of this type, piracy is an ever-present danger and most stations will mount a modest defensive armament to at least discourage attacks by pirates and criminal cartels. These weapons are not the Trading II's main defense, however. Instead, they rely on their value to their owners, who will frequently build defensive stations in close proximity to the Trading IIs in order to provide a deterrent factor. In fact, more than one station manufacturing corporation will offer a good discount on the cost of building a Trading II if the buyer will commission a defensive station at the same time. 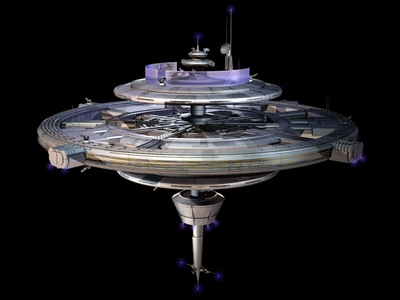