Hundreds of years ago in the Tharin sector, two small merchants tried to realize a dream of theirs; to build a station everyone would visit. To save costs, they did not hire any engineers, designers, or professional station builders. Further emphasizing their cost saving, these merchants also used scavenged parts of other ships and stations. The station would be dubbed Junkfort Station. Whether a sign of popularity or as a deterrent, the system the station resides in is also named after it, Junkfort Station system.

Junkfort Station is a menagerie of sections and modules that have been assembled from various other ships and stations over the years. Though it may not look impressive, this is part of the allure for smugglers and traders who wish to keep a low profile. The station boasts, albeit rather discreetly, a reputation for illegal ship modifications. It is rumored that some of the best ships in the galaxy owe their impressive performance to Junkfort Station and the services it provides.

Due to the complex design, a relatively limited amount of storage capacity is available and mainly set aside for the fighters that the station employs as its primary defense. Additionally, a large shield array is present to provide further protection. Over the years, the station has been subject to upgrades, though this is mainly in regards to occupancy levels.

Despite having changed ownership multiple times, little has been altered in the management and operations of Junkfort Station. The modification of ships this station is able to offer are highly coveted and due to this success requests for improvements to the station are rare and largely overlooked. 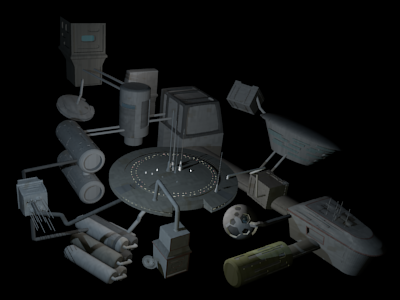