The Shipyard II is the second in a series of four and is able to produce all starfighters, freighters and most capital starships. The design was changed and improved over the Shipyard 1 in order to expand its storage capacity and production capabilities.

Six durasteel girders run the one-thousand meter length of the Shipyard II to support the framework of a starship, which can be as long as the station itself, during the production process. On the outside and mid-center of the station there are large complexes, one on each side. Together, these complexes provide crew housing, raw material storage, docking and hangar bays and the control facilities for the station. The overall design of the station provides a very efficient manner for access to raw materials and the construction tools that are needed to produce starships.

The station is defensively equipped with heavy lasers and concussion missile launchers, including tractor beams which can be used to hold an enemy starship in place. However, the tractor beams are more often used to move cargo in and out of the station. The deflector shields and hull will allow the station to withstand a minor attack and were engineered to provide enough time for the occupants to safely evacuate using any of the numerous escape pods available. The Shipyard II is a space station of quality construction and design and is the best choice for those interested in producing a wide variety of the most common starships in the galaxy. 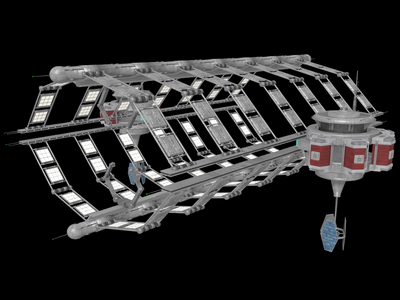