Originally designated CSD-71130, the Kalvati-Class Shipyard was named after the first ship to be created in the shipyards, an Acclamator warship. Unfortunately, the Kalvati was destroyed not too long after her maiden voyage. So to honor those lost, the shipyard design was nicknamed Kalvati.

The Kalvati-Class Shipyards are in service through out the galaxy with numerous corporations mainly because it can be used to create a wide variety of ships from the small and nimble A-wings to large and powerful Imperial-class Star Destroyers. With this kind of versatility, Kalvati Shipyards see the most use with those producing a variety of starships.

This orbital construction site is well stocked and able to handle any job. For instance, the Kalvati Shipyards are all fitted with state of the art robotic assembly lines for the smaller jobs requiring precise control. These allow for the smaller components to be built on site and quickly so the only thing that has to be brought to the build site is materials. With the massive storage holds, it can seem like forever before the next shipment is needed.

The designers were not only thinking about speedy build times or quality products when they thought up the Kalvati-class Shipyards. Included for station defense is fourteen heavy lasers and three concussion missile tubes. Not enough to repel major invasions, but enough to keep harassing fighters and small raiding parties at bay. The designers of the Kalvati Shipyards do encourage however, that you construct them close to system defense forces, just in case. 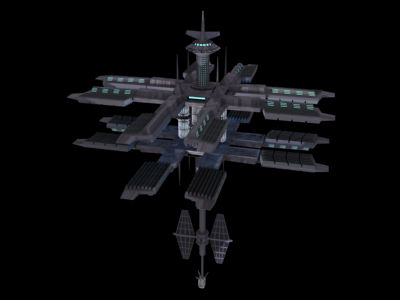