The Republic Gunship was designed to offer law enforcement and planetary security forces a capable, affordable patrol craft. During the clone wars, most military hardware was in service to the war effort, leaving security personnel without the military surplus they often relied upon for equipment. The gunship's engineers decided to use an early version of the twin ion engine that would later appear in the TIE/ln starfighter, along with prototypes of the octagonal, solar cell wings. The engines gave the craft a respectable speed and reliability for its class. It comes equipped with four high-powered spotlights that can be operated separately, as well as four laser canons: two fixed guns on the winglets and tavering guns just below the cockpit. The cockpit, also reminiscent of later Imperial craft, allows the pilots a one hundred and eighty degree field of vision. Its reliance on four winglets instead of the traditional two-wing design aids stability in even the most adverse atmospheric conditions. Sliding armored doors offers its crew protection while in motion and a seamless loading and unloading when landed.

While the Republic Gunship found popularity in the mid-rim, core, and in other densely populated areas, it fell short of galactic acclaim. Its relatively small crew and cargo capacity discouraged use in more remote areas where reinforcements may not be an option. Additionally, as the Republic transitioned into the Empire, law enforcement became the domain of the Imperial military, and military vehicles took the place of civilian craft in these roles. After much of the gunship fleet hit the surplus market and auction houses they found use again as search and rescue craft, with pirate gangs, or in some instances as scenic tourist transports on worlds with large vacation industries. 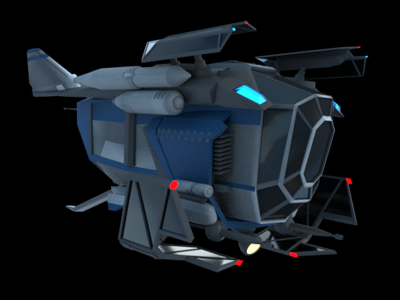