The designers of the 105-K had only one thing in mind when they began designing it: speed with the wind in your hair, fur, or tentacles. Feeling that the bikes in the swoop racing class were just not fast enough, they mounted a larger engine on a similar frame and made the Lancer's top speed 100km/h faster than its nearest competitors. The trade off, however, came from maneuverability. Because of the extra power and weight, the 105-K is very unstable in turns, especially at top velocities.

In an attempt to break into the military technology market, the designers developed variants outfitted with blasters and other upgrades. The attempt was scrapped however when they decided that the extra weight detracted from the original objective of pure speed, making it both the main feature and its defense mechanism.

Despite its technical shortcomings and lack of marketing to the military industry, the 105-K found wide spread use among the military units in both official and unofficial capacities. Many mechanized units were able to beg, borrow and steal many units for service, primarily as courier bikes when normal communication channels were otherwise disrupted.

The 105-K's marketing towards the intended civilian population also met with immense popularity. Thrill-seeking swoop racers, affluent young riders and those with a need for speed took an immediate liking to the swift bike. The combination of high speeds and low maneuverability have spawned both legitimate and mostly safe race circuits as well as the banned and illegal circuits that often result in deaths and serious injury. 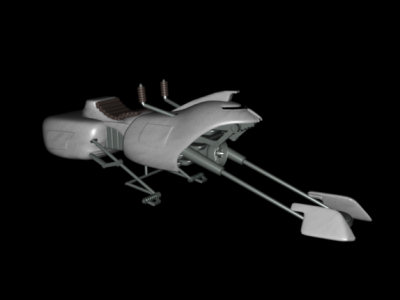