At a total length of just over 14 meters, the Quadrijet 4 Barrel 904E is one of the longest pod racers ever produced in the Galaxy. Originally manufactured by Bin Gassi Racing Engines, the Quadrijet boasts a powerful top speed of 790Km/h obtained from twin bulbous engines, each housing four nacelles emerging from each combustion chamber.

Even though the Quadrijet is able to reach such high speeds, the flaws in its original design were quickly obvious by the more experienced pod racer. The dual combustion chambers are known for their tendency to overheat, especially when racing on some of the more high temperature Outer Rim circuits. Additionally, the factory welding on the engine housings is poor and prone to open up at top speeds. Even the inner components of both the engines and control systems are substandard and prone to malfunction at inopportune times.

While many issues with the Quadrijet's design could be corrected with after-market modifications, the podracer's ultimate downfall can be directly attributed to its relentlessly poor handling, which some experts blame on its excessively long cockpit. Measuring almost 7 meters in length, the pared-down cockpit trails high above and behind the dual engines while connected to them via Steelton control cables. Racers often have to battle against pod drift whilst cornering, which, while entertaining for spectators, leaves the pilot straining to keep control. At its worst, the Quadrijet's large cockpit can act like a pendulum on corners, swinging the pod out of control and crashing into surrounding obstacles.

Due to its woeful handling abilities and the production of newer, faster podracers, Bin Gassi Racing Engines discontinued the manufacturing of the Quadrijet and relegated the pod to the confines of rare collectors' garages. 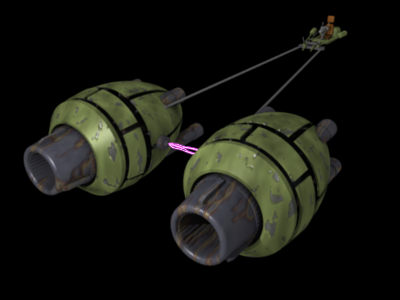