The sea-dwelling, beakless birds called the Porgs are widely considered to be among the most charming non-sentient species in the galaxy. Small and stocky, they possess short wings on the sides of their bodies that allow them to take flight, and they have a pair of webbed feet that enable these creatures to move swiftly across the ground when they wish. This might seem contradictory due to their stocky build, yet their stature appears to be heavy because of the hydrophobic, thick outer layer of white, grey, and brown feathers and a warm inner layer of fluff. As a result, the Porgs do remarkably well in colder climates, and even prefer such environments over warmer or drier ones. Rumours suggest that these creatures were native to the supposed long-lost homeworld of the Jedi, yet they have spread across the galaxy since, and adopted a plethora of rocky and watery planets as their new homes.

Porgs hatch from their eggs in pairs, and their newborns are called "porglets." At this stage in their lives, these creatures appear to be near-identical to one another. It is only after they grow older that a sexual dimorphism begins to take shape, as males of this species can be identified by the orange plumage around their eyes and their slightly larger form, while females lack the aforementioned coloration and have a somewhat smaller build. These creatures largely live near the seaside, where they build their nests along rocky cliffs from grass, branches, leaves, and any interesting or shiny objects that they find in their surroundings.

These little bird-like creatures have an innate hyper-curiosity that is not easily satisfied. New environments and experiences endlessly fascinate the Porgs, and they often appear to be quite smitten with man-made objects and technology. While an excellent companion, they can easily wreak havoc on their immediate surroundings if their eager inquisitiveness is not kept in check. Nonetheless, they enjoy attention and petting (especially scratching behind the ears) and let out a very distinct song when they are pleased. It is perhaps this unique crooning sound that the Porgs are most known for across the galaxy, aside from their adorable appearance. 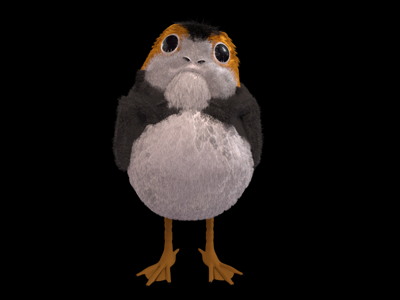